Major General Cadmus M. Wilcox was one of General Lee’s most reliable commanders. He served in almost every battle of the Army of Northern Virginia and led a charmed life, never being wounded or missing too much time at the front from illness. Well liked and easy to get along with, Wilcox was friendly and informal in camp but still a precise and professional soldier. From his years of service in the United States Army before the war and then from casting his lot with the South, he had many friends that wore both the grey and the blue. He was the best man for the wedding of General U. S. Grant and at his own funeral, the eight pall bearers were made up of four Union generals and four Confederate generals.

Wilcox was born in Wayne County, North Carolina on May 29, 1826. His family moved to Tennessee when he was two years old and he grew up there in Tipton County. He studied at Cumberland College in Nashville and in 1842 was appointed to the United State Military Academy at West Point. He graduated near the bottom of the now famous class of 1846 where he was a classmate to Thomas Jackson, George McClellan, and George Pickett. After graduation, Wilcox immediately joined the army in Monterey and was a brevet second lieutenant. After his service in Mexico, he was ordered to West Point as assistant instructor of military tactics and stayed there till the summer of 1857 when he was sent to Europe on twelve months furlough. When he returned, Wilcox published a book on rifles and rifle practice and it was made a textbook at West Point. He was promoted to captain while he was serving in New Mexico and in June of 1861, upon hearing of Tennessee’s secession, he tendered his resignation to the United States army.

Traveling to Richmond, Wilcox was commissioned colonel of the 9th Alabama regiment on July 9, 1861 and was in command at the battle of First Manassas. Just three and a half months later, he was commissioned brigadier general. He played an important role in the early battles of Williamsburg, Seven Pines, and the Seven Days battles around Richmond. At Frayser’s Farm, almost every regimental commander in the brigade was killed and six bullets pierced Wilcox’s clothing. The loss in his brigade was higher than any other brigade in Longstreet’s command. Wilcox’s brigade did not see a lot of action in the rest of 1862’s battles. He missed the Maryland campaign because of illness and was not engaged at Fredericksburg. The spring and summer of 1863 would be a different story, however, for the genial and good natured Wilcox. One of his finest hours would come during the battle of Chancellorsville when he discerned that the federal army was not crossing at the ford he was guarding but indeed crossing in Fredericksburg and preparing to attack the rear of Lee’s Army. Wilcox moved his brigade to intercept and at Salem Church, his brigade fought a delaying action and held off an entire Union corps until reinforcements arrived from Chancellorsville. This action saved Lee’s army. With Wilcox’s star rising, his brigade performed admirably and fought two days on the deadly fields of Gettysburg. On July 2, his charge against the Union center almost pierced the federal line. His brigade served as support on the right flank of Pickett’s division during Longstreet’s assault on the third day but heavy Union artillery fire broke up Wilcox’s advance and he ordered the brigade to retire.

Wilcox was commissioned a major general a month later and he took over the division of General Dorsey Pender after Pender’s death. From the Wilderness, Spotsylvania, the siege of Petersburg, and through to Appomattox, Wilcox’s division continued to be dependable and reliable. Wilcox’s desperate defense of Battery Gregg and Battery Whitworth during the all-out Union advance on Petersburg allowed Longstreet to cover Lee’s retreat and start the evacuation of the army. At the close of hostilities, Wilcox, a lifelong bachelor, settled in Washington. He was offered a command in the Egyptian Army but declined it. President Cleveland appointed him chief of the railroad division of the Land Office. He held this position until his death on December 2, 1890. He is buried in Oak Hill cemetery in the District of Columbia. 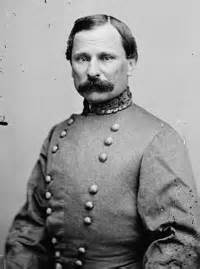