Daniel Harvey Hill, born on July 12, 1821 at Hill’s Iron Works in York District, South Carolina, was the son of Solomon Hill and Nancy Cabeen Hill. He grew up and attended the United States Military Academy and graduating 28th out of 56 in the Class of 1842. After his graduation, he received a commission to second lieutenant and served in the artillery. There he saw action in the Mexican War at the Battles of Contreras and Churububsco. He also would be brevetted a major after his actions at the Battle of Chapultepec.

D. H. Hill resigned from the Army in 1849 to take a position as a mathematics professor in Lexington, Virginia at Washington College. In Lexington, he met Thomas J. Jackson who became his brother-in-law. While at Washington College, Hill authored a math textbook, endorsed by Jackson. He became a professor at Davidson College in 1854, and served in that role until 1859 when he became superintendent of the North Carolina Military Institute in Charlotte.

Hill married Isabella Morrison in 1848. She was daughter of a prominent minister in North Carolina, Robert Hall Morrison. Hill and Isabella had nine children. Their youngest son served as Chief Justice of the Arkansas Supreme Court from 1904 until 1909.  Daniel Harvey Hill, Jr. became President of North Carolina State University.

Hill offered his services to North Carolina upon its secession from the Union. He received appointment to Colonel of the 1st N. C. Infantry. In this capacity he led troops in the first land battle of the war near Fort Monroe, Virginia, known as the Battle of Big Bethel on June 10, 1861. He received a promotion to brigadier general and command of troops around Richmond. He served in this capacity until receiving a promotion to major general and given a Divisional Command in the spring of 1862.

Hill fought in Yorktown, Williamsburg, and in the Peninsula Campaign.  He gained distinction for his actions at the Battle of Seven Pines and the Seven Days Battles where he fought gallantly.

Hill received the task by General Lee to meet with Union General John Dix to reach an agreement for prisoner exchanges between armies. The two met and came to an agreement, the Dix-Hill Cartel, on July 22, 1862.

When the Army of Northern Virginia moved into Maryland in 1862, D. H. Hill was leading a Division in the Second Corps. His men fought gallantly at the Battle of South Mountain buying enough time for General Lee to concentrate his forces in Sharpsburg, MD. In the ensuing battle at Sharpsburg, he fought with his troops at the Sunken Road, commonly called the Bloody Lane. Hill had three horses shot from under him in this fierce engagement but held the line with his men and after rallying men of various other divisions. He did not fight in Fredericksburg or Gettysburg. In June 1863, while Lee and the Army moved north to Pennsylvania, it was Hill left in command to defend Richmond.

Some of the blame for the failures in the Maryland Campaign that put on D. H. Hill for losing the Order 191 was unjust. This order was a detailed plan of Lee’s movements and strengths. Union forces found a copy of the order and gave it to General McClellan. However, D. H. Hill had his original copy and there has been controversy ever since over whom the orders belonged to and with whom the blame should rest.

Major General Hill failed to get the promotion for the command of the Second Corps after Stonewall Jackson’s death. It was at this time that General Hill began his quarrels with General Lee. He was upset over the pass over for lieutenant general despite having been eligible. He then received orders to NC to recruit troops. In the fall of 1863, he received orders to go to the Army of Tennessee with a temporary promotion to lieutenant general and command of one of Braxton Bragg’s Corps.  Leading a Corps in the Chickamauga Battle, his troops saw some of the heaviest fighting. After the battle, Hill joined the other officers under Bragg’s command and openly expressed their displeasure in Bragg not following up on the Confederate Victory at Chickamauga.  In response, President Davis came directly to the Army to resolve the issue. He ruled in favor of General Bragg despite overwhelming distrust of him. Upon reorganization, again, of the Army of Tennessee, General Bragg requested Hill be removed. This left Hill with no Corps to command and his rank reverted to major general. Sent home to North Carolina, he served in several smaller capacities, mostly volunteer roles. Hill served as an aide for General P. G. T.  Beauregard. He also served as a trench and fortifications inspector in Petersburg. Hill fought his last action at the Battle of Bentonville in North Carolina. In this battle, he was a Division Commander for the Army of Tennessee under General Joseph E. Johnston. He was present at the Durham Station surrender of the Army of Tennessee to William T. Sherman on April 26, 1865.

Daniel Hill returned to North Carolina where he became editor of the Charlotte based magazine The Land We Love. He became President of the University of Arkansas. He moved to Georgia in 1885 and led the Military and Agriculture College of Milledgeville, GA. General Hill served in this role until his resignation in 1889 due to his declining heath. He died from cancer on September 24, 1889. His remains lie buried in the Davidson College Cemetery in Davidson, NC. 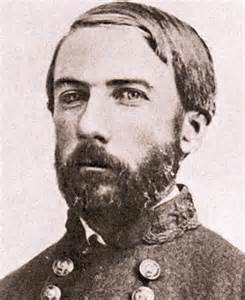