Evander McNair was born on April 15, 1820, at Laurel Hill, Richmond County, North Carolina. Soon after his birth, his mother and father moved to Mississippi and settled in Sampson County. Evander grew up and opened a Mercantile, when he was in his twenties. With the Mexican War, Evander joined the 1st Mississippi Rifles under the command of Colonel Jefferson Davis.

In 1856, Evander resettled in Washington, Arkansas, and opened a Mercantile. He  remained in business until Arkansas succeed from the Union. To help the Southern Cause, McNair raised seven infantry companies, and together with other Volunteer Units, formed the 4th Arkansas Infantry Regiment and was promoted to Colonel.

After the Battle of Pea Ridge, McNair, and his Brigade, were reassigned to Edmund Kirby Smith’s Command and would take part in the attack at Richmond, Kentucky. In November of 1862, Colonel McNair was officially commissioned Brigadier General.

McNair, and his Brigade, took part in the attack on the Union right at the Battle of Stones River, Murfreesboro Tennessee. In spring of 1863, McNair’s Brigade and several other units were attached to the Army of Tennessee to help relieve the siege at Vicksburg Mississippi.  In this role, his Brigade saw a lot of action around Jackson, Mississippi.

His Brigade ended up at the Battle of Chickamauga, with the Army of Tennessee, where they took part in the breakthrough of the Union lines that ultimately turned the tide of the battle in favor of the Confederate Army.  While leading his men, he was severely wounded and his brigade sustained heavy losses.  General McNair and his Brigade were reassigned to Mississippi to rest and recuperate from the hard campaigning.  His Brigade remained in the Department of Trans-Mississippi for the remainder of the war.

In December of 1865, General McNair received a pardon and returned to Arkansas, but due to the poor economy, and Reconstruction, closed his business. He left Arkansas for New Orleans, Louisiana and after several years, moved to do business in Hattiesburg, Mississippi. He died on November 13, 1902 and is interred at the Magnolia Cemetery, Mississippi.  Despite being loyal to the Southern Cause, Evander McNair was married to a Yankee woman with a New York upbringing by the name of Hannah Merrill whom preceded him in death in 1878. 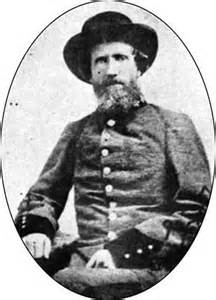