Gabriel James Rains was born in New Bern, NC on June 4, 1803 to Gabriel M. Rains and Ester Ambrose. Rains attended the U. S. Military Academy in West Point, NY.  He graduated 13th in the Class of 1827 and was commissioned a second lieutenant in the infantry.

Rains saw action in the Seminole Wars and was promoted to captain in 1837. Having been wounded twice in 1840 while fighting the Seminoles around Fort King. FL, he was brevetted to major. He took part in the Mexican War and was crucial in the defense of Fort Brown in May, 1846. He then was sent to recruit troops for Winfield Scott’s campaign.  He was promoted to major in 1851 before going out west and fighting Indians. He commanded Fort Humboldt and was promoted to lieutenant colonel in 1860. He remained that rank until the outbreak of the War Between the States.

Gabriel Rains resigned his commission in the U. S. Army on July 31, 1861 and received a commission as a brigadier general in the Confederate Army. He led a brigade in the Division of D. H. Hill, seeing action at Yorktown in the Peninsula Campaign. In the Battle of Yorktown in 1862, Rains employed several explosives in the first use as anti-personnel mines. These led to several Union dead and drew harsh criticism from his superiors, and Union leaders alike.

Rains fought under D. H. Hill at the Battle of Seven Pines where he was severely wounded. He did not return to command in the field.  Robert E. Lee ordered Rains to torpedo and mine the James River to help protect it from Union attack. This took three months to accomplish.  Then, he was transferred to command of the Cape Fear District in North Carolina. Jefferson Davis instead reassigned him to the Volunteer and Conscript Bureau in December 1862. While working in the Conscript Bureau, he came up with several ideas to utilize torpedoes and mines to protect Confederate ports.  Jefferson Davis relieved him of his duties in conscription and ordered him to Vicksburg to protect the Mississippi River. However, Rains did not have enough time to employ his trade before Vicksburg fell to Grant. He did the same in Charleston and, later, in Mobile Bay in Alabama. In the attack by U. S. ships in 1864 on the port of Mobile, one of Rains torpedoes sank the U. S. S. Tecumseh. He was  then sent to Richmond, VA in May of 1864 to help protect the capital from Union forces.

As the war started turning unfavorably for the Confederacy, Rains’ explosives were being utilized more and more. He dispatched subordinates to help in other sectors while he remained in Richmond increasing the defenses there. He continued to serve in this role until the war ended.

At the conclusion of the conflict, Rains moved to Atlanta, GA and become a chemist for a fertilizer company in Atlanta. He then became a U. S. Quartermaster Department clerk. He also continued to develop his designs and eventually even made a safety mechanism for his mines. He moved to Aiken. SC and died there on August 6, 1881. He is buried in Aiken, SC in the Saint Thaddeus Church Cemetery. 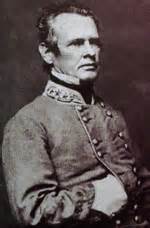