George Burgwyn Anderson was born in Orange County, North Carolina, on April 21, 1831, the eldest son of William Anderson and Frances E. Burgwyn. He attended private school at the Caldwell Institute and worked with his father on the plantation. George Anderson attended the University of North Carolina in nearby Chapel Hill until receiving an appointment to the U. S. Military Academy in West Point, NY. He graduated in the class of 1852 and received a brevet Second Lieutenant Billet in the 2nd U. S. Dragoons. Training in Carlisle, PA, George then became a second lieutenant in the U. S. Cavalry. Upon his promotion, he was sent to California to do some surveying for the railroads and then reported to Texas. George B Anderson then served in various billets and saw action in the Utah War. In 1859, he was sent to Kentucky where he met and wed Miss Mildred Ewing.

George Anderson resigned his commission four days after his thirtieth birthday. The Governor of North Carolina accepted his services and appointed him Colonel in the 4th N. C. He led this unit in the Battle of Williamsburg May 5, 1862. He was then promoted to command a brigade in D. H. Hill’s Division and with it came a formal promotion to brigadier general on June 9th.  Brigadier General Anderson ended up seeing action with this Division in the Seven Days Battle and the Battle of Malvern Hill where he was wounded seriously in the hand. He returned to duty in time to march north with the Army of Northern Virginia in the Maryland Campaign of 1862. General Anderson led his brigade in the Battle of South Mountain before coming down the Cumberland Valley to Sharpsburg, MD. The Army of Northern Virginia and the Union Army collided at Sharpsburg, MD. In the Battle of Sharpsburg, Anderson and his Tar Heel Brigade saw heavy fighting in the sunken road known as the Bloody Lane. His boys fought gallantly and repelled several attacks from Union troops. General Anderson remained with his troops fighting in the Bloody Lane until being shot in the ankle. George B. Anderson was taken from the field and transported to Staunton, VA. He eventually ended up in Raleigh, NC where his foot became infected and required amputation.  George Burgwyn Anderson died in Raleigh, NC on October 16, 1862, nearly a month after he was wounded. His death was due to complications from the infected leg being amputated.  His remains are interred at Oakwood Cemetery in Raleigh, NC. 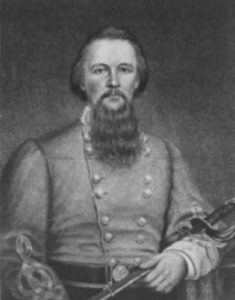