James Conner was born in Charleston, SC on September 1, 1829. Obtaining an education in law from South Carolina College, he opened a practice in 1849. He became a U. S. District Attorney and served in this capacity until 1860. James Conner was a vocal advocate of secession and was a member of the secession convention.  However, he did not vote on the ordinance of secession.

Conner participated in the opening shots fired at Fort Sumter as a Captain of the Montgomery Guards. He received an offer as a district attorney for the Confederacy but he declined deciding to join the Hampton Legion. He fought with this unit at First Manassas while Colonel Hampton recovered from his wounds. Conner led the legion. He received a promotion to Major of the Hampton Legion in July, 1861. During the Seven Pines Battle, Conner assumed command of the 22nd N. C. Regiment. Colonel Conner received a broken leg from a minie ball while leading the 22nd in the Battle of Gaines Mill. His injury, a broken leg from a minie ball, took two months to heal. Conner returned to the 22nd in time to participate in the Battles of Chancellorsville and Gettysburg before resigning his commission on August 13, 1863.  He would then become a military court member in the 2nd Corps of Lee’s Army. Conner returned to field command in June 1864 with the rank of brigadier general. He saw further action in the Petersburg Siege. Conner actively participated in the Shenandoah Valley Campaign of 1864 led by Jubal Early. In the skirmish at Cedar Creek, he received an injury from a bullet to the leg. This injury led to an amputation and subsequently rendered him useless in field command.

Upon the end of hostilities, James Conner returned to Charleston, SC and took up practicing law again. He won the 1876 South Carolina Election for State Attorney General. In his role as Attorney General, he certified that Wade Hampton won the election as Governor of SC. He died in Richmond, Virginia on June 25, 1883 and his remains rest in Magnolia Cemetery in Charleston, SC. 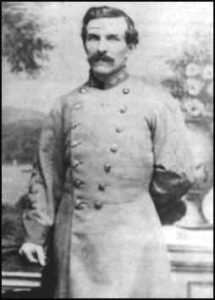