Upon his graduation from West Point he was commissioned a second lieutenant and assigned to the First United States Artillery. He served in the Mexican War and fought in the battles at Vera Cruz, Monterrey, Cerro Gordo, Contreras, and Churubusco. In the Churubusco battle, Martin lost his right arm from grapeshot. He yielded command of the battery to Thomas Jackson. He was brevetted to Major due to his actions at Churubusco and Contreras.

Upon the end of the Mexican war he was appointed to Fortress Monroe in Philadelphia as assistant quartermaster. He then went to Minnesota and was assigned to Fort Snelling, where his wife, Mary Ann, died. In February of 1858, Martin married his second wife, Hetty King. He then served in the Utah War with Albert Sydney Johnston before being assigned to Fort Riley in Kansas.

James G. Martin resigned his commission from the United States Army in June of 1861. He traveled to North Carolina and was commissioned a captain in the Cavalry. He was soon appointed Adjutant General of North Carolina. In this assignment he recommended that the southern states use blockade runners to receive supplies from Europe. Martin was given command of the

State’s forces and was appointed Major General of Militia. He continued to gather supplies and troops for the state of North Carolina. He was very successful in his recruiting and actually gathered 12,000 more men than required by quota. In May of 1862 he completed his recruiting duties and applied for a field position, which he received along  with a commission as a Brigadier General in the provisional army. In August of 1862 he was assigned to the command of the North Carolina District. He then formed a brigade from the men under his command and took the field at Wilmington, NC in 1863.

General Martin and his brigade took part in the attack against New Bern, NC in February of 1864. Martin and his unit successfully drove Union troops away from Newport, NC. At the opening of the Overland Campaign in 1864, Robert E. Lee called Martin and his brigade to Virginia. He distinguished himself while attacking Union troops in the Petersburg area while under General D. H. Hill. He then joined Hoke’s Division. They fought at Cold Harbor and reinforced the Army of Northern Virginia. Martin then was sent back to Petersburg which came under siege from Union troops. While here his health began to fail him. He was sent to western North Carolina to command the Western North Carolina District. Martin served the Confederate Army until he surrendered to Union troops on May 6, 1865. Martin surrendered the last remaining Confederate troops in the state of North Carolina.

After the war was over, Martin was completely destitute. He began to study law. He was admitted to the bar and practiced law in Buncombe County, NC until his death on October 4, 1878. He is buried in the Riverside Cemetery in Asheville. NC. 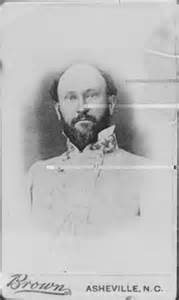