James Johnston Pettigrew was born July 4, 1828 at his family’s plantation, Bonarva, in Tyrell County, NC. His father was a wealthy heir from French descent. His mother was Ann Sheppard. The young Pettigrew entered the University of North Carolina in Chapel Hill, NC at the age of fifteen. He excelled in his academic studies as well as fencing and boxing. President James K. Polk appointed Pettigrew as assistant professor at the U. S. Naval Observatory. He, soon thereafter, learned law and practiced in Baltimore, MD before moving to Charleston, SC and joining his father’s first cousin in practice.  Pettigrew traveled to Europe for several years where he learned seven languages.

With the outbreak of hostilities, Pettigrew enlisted in the Hampton Legion as a private. He was quickly promoted to Colonel of the 1st S. C. Rifles.  He returned to North Carolina to assume command of the 12th N. C. Regiment (renamed the 22nd N. C.). As the war proceeded, he was promoted to Brigadier General on February 26, 1862 and ordered to Virginia.

Pettigrew fought in the Battle of Seven Pines where he was severely wounded in the throat by a bullet. He was shot again while lying on the field wounded and then he was bayonetted. He was left for dead but he was captured by Union troops. He was exchanged two months later. Pettigrew recovered from his wounds and found himself a brigade commander in D. H. Hill’s Division. He returned to his North Carolina Brigade in time to command it at Gettysburg.

In June, 1863, Robert E. Lee and the Army of Northern Virginia attacked the North. Pettigrew’s Brigade was in Heth’s Division of A. P. Hill’s Third Corps. It was one of the stronger brigades in the Army of Northern Virginia. On July 1st, Heth’s Division encountered heavy fighting and Pettigrew’s Brigade fought against the Iron Brigade on McPherson’s Ridge. Pettigrew’s men sustained heavy losses but drove the Iron Brigade from the ridge. Henry Heth was wounded in action and command of the Division fell to Pettigrew.

Despite the heavy losses sustained on July 1st, Pettigrew’s Brigade and Heth’s Division, with Pettigrew in command, took part in the frontal assault on the center of Union lines on July 3rd. Pickett’s Charge, also called the Pickett-Pettigrew-Trimble Assault, found Pettigrew’s men assigned to the left of the line with Pickett’s Division in the middle. Pettigrew led his men in the assault on his horse which was shot from under him in the engagement. Despite the devastating fire, the men continued on with Pettigrew leading them on foot. He encountered the lines of his cousin John Gibbon and was wounded in the hand by canister shot. General Pettigrew and his men stayed in the fight until they were about one hundred yards from the stone wall and then were repelled.

Pettigrew continued to lead Heth’s Division until he recovered on the retreat to Virginia.  Pettigrew’s men were guarding the Potomac River crossing at Falling Waters, WV. They were attacked on July 14th by Union Cavalry. While leading his brigade in a defense against the Union Cavalry, Pettigrew was shot in the abdomen. He was carried to the rear and taken to Edgewood Manor in Bunker Hill, WV. There, he died from his wounds of July 17, 1863. His remains were taken to his family home of Bonarva and interred there in Tyrell County, NC. After the fifty six per cent loss of his brigade at Gettysburg they were no longer an effective fighting unit. 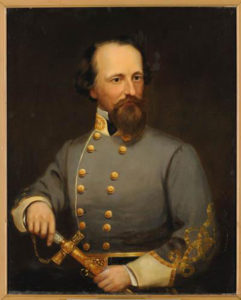