On April 10, 1806, Leonidas Polk was born in Raleigh, NC to parents, Colonel William Polk and Sarah Hawkins. Colonel Polk was a veteran of the revolutionary war and a successful planter. Leonidas attended the University of North Carolina for a brief period before attending the United States Military Academy. He graduated eighth in the Class of 1827. He was appointed to the U. S. Artillery as a brevet second lieutenant. He only briefly served in the U. S. Army before resigning his commission in December of 1827 to attend the Virginia Theological Seminary.

He was successful in his studies at the Seminary and went on to become an assistant to the Bishop at Monument Church in Richmond, VA. While in Richmond, he met and married Mary Ann Deveraux and they eventually had eight children. He became an ordained priest in 1831.

Leonidas Polk and his family moved to Maury County, TN in 1832 and built a large home there named Ashwood Hall. He went on to become a planter there and became wealthy.  Leonidas Polk and his brothers built a family chapel at Ashwood Hall named St. John’s Church. While a planter, Polk was also a priest at St. Peter’s Church in Columbia, TN.  He was appointed Missionary Bishop of the Southwest in 1838 and then was elected to serve as the first Bishop of Louisiana in 1841.

Polk petitioned his friend and classmate from West Point, Jefferson Davis, offering his services to the South upon the outbreak of the war. Davis appointed him a major general in June, 1861. He was assigned the 2nd Department in the area between the Tennessee and Mississippi Rivers. Here he made a large blunder by moving troops into Columbus, KY. Kentucky had declared itself neutral until Polk moved troops into the state. The state then requested Union help to defend its borders which would keep Kentucky in the Union.

Polk was wounded in a cannon explosion in November, 1861. He recovered from his wounds and returned to duty. He argued with Generals Pillow and his commanding officer, General Albert Sydney Johnston, when he tendered his resignation. Davis declined to accept it. Polk remained with Johnston’s Army of Mississippi and commanded a Corps at Shiloh. He remained in the Army of Mississippi when General Bragg was assigned command upon the death of Johnston. Polk led his Corps in the Battle of Perryville where his troops attacked the Union Army of Don Carlos Buell.

Polk then tried to use his friendship with Davis to get Braxton Bragg removed as leader of the Army of Mississippi.  However, this attempt was unsuccessful and began a long conflict between Bragg and Polk. Leonidas Polk became the second Lieutenant General of the Confederacy behind James Longstreet on October 11, 1862. He was assigned to command the First Corps of the newly renamed Army of Mississippi, now the Army of Tennessee. He remained with that Army until the fall of 1863, seeing action at Stones River, Tullahoma, Chattanooga, and Chickamauga.

At Chickamauga, Bragg scored a decisive tactical victory over the Union Army. Polk was in charge of the right wing on the second day of the attack. He was delayed in his attack. Later, Bragg wanted to know why he was delayed and Polk laid blame directly on D. H. Hill. Polk led a petition of several of the other officers in Bragg’s Army requesting Jefferson Davis to replace Bragg. Bragg asked for and received a transfer for Polk. D. H. Hill was relieved and he returned to North Carolina while Davis left Bragg in command of the Army of Tennessee.

Lt. General Leonidas Polk was assigned to command the Department of Mississippi. In February, 1864, he unsuccessfully opposed Gen. Sherman in defense of Meridian, MS. Polk and his troops were sent to join Joseph Johnston, who had replaced Bragg, and the Army of Tennessee at Atlanta. Polk arrived with 20,000 men and began to help in the defense of Georgia. Polk was killed by a Union shell on June 14, 1864 while scouting enemy positions on Pine Mountain. His remains were buried in Saint Paul’s Church in Augusta Georgia before being moved in 1945 to Christ Church Cathedral in New Orleans, LA. 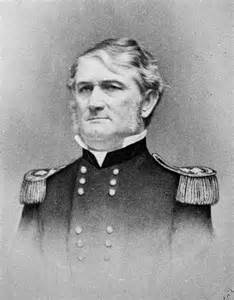