Lucius Eugene Polk was born on July 10, 1833 in Salisbury, NC. His parents moved near Columbia, TN when Lucius was two years old. In 1850-1851, Polk attended the University of Virginia before moving to Helena, Arkansas and becoming a planter.

In 1861, with the onset of the War Between the States, Polk enlisted in the Yell Rifles where he became a private serving under Patrick Cleburne.  At the Battle of Shiloh, then a Second Lieutenant, Polk was seriously wounded in the face. Soon after recovering from his wounds he was given command of the 15th Arkansas and with it a commission of its Colonel.  Polk and his regiment were in the brigade of Patrick Cleburne.  He was promoted to Brigadier General upon Patrick Cleburne’s promotion to Major General. Polk’s brigade saw action at Stones River, Chickamauga, Chattanooga, and the Atlanta Campaign.  Polk fought until being seriously wounded in June of 1864 at the Battle of Kennesaw Mountain. Polk was honorably discharged due to his injuries.

Polk returned to Columbia, TN after his discharge and served in the political sector as a Democratic National Convention Delegate in 1884. He then served the State of Tennessee as a Senator in 1887. Lucius Eugene Polk died on December 1, 1892 in Columbia, TN. His remains were taken to nearby Ashwood, TN and buried at the St. John’s Cemetery. 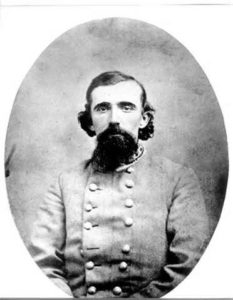