Robert Brank Vance was born on Reems Creek in Buncombe County, North Carolina on April 24, 1828. One of several children of Captain David Vance and Mira Margaret Baird, his brother Zebulon Baird Vance would become North Carolina’s war time Governor. Vance had a happy and healthy childhood on the family farm and attended local schools. When he turned twenty, he became the clerk of the court of pleas and quarter sessions for Buncombe County for several years, a position his father previously held. When Vance left the job as clerk of court, he became a merchant in Asheville. Entering the war in 1861 as captain of a company he raised, he rose to General before spending the last year of the war as a prisoner.

Though Vance held Unionist sympathies, when the Civil War began, he volunteered for the Confederacy and raised a company of volunteers called the Buncombe County Life Guard and was its Captain. On the formation of the 29th Infantry Regiment, Vance’s company was renamed company H and he was chosen to be the Colonel of the regiment. After initially guarding bridges in western North Carolina, the 29th saw action in Tennessee defending the Cumberland Gap and eventually came under command of General E. Kirby Smith. When Vance’s brigade commander was killed at Murfreesboro, he commanded the brigade for a while, receiving praise for his performance. Vance contracted typhoid fever during this time and during his illness, was appointed Brigadier General by President Davis to rank from March 4, 1863. After his recovery he took command of a separate military district in Western North Carolina in the summer of 1863. His role in this command was to defend against federal incursions in his district and to assist Confederate forces in Tennessee with his own raids. When General Longstreet ordered him to assist the Confederate effort in east Tennessee, General Vance and his command captured a Union Supply train but in turn General Vance and fifty of his command were captured at Crosby Creek trying to bring the supplies back to North Carolina. General Vance and his men were imprisoned in Union prison camps, first in Nashville but eventually winding up at Fort Delaware.

While imprisoned, General Vance fared better than many, in part because of his earlier kind treatment of a Union prisoner.  Reverend Nathaniel Taylor was a Union sympathizer that General Vance had given protection papers while Vance was occupying Reverend Taylor’s home area. When Reverend Taylor heard that Vance was imprisoned he contacted Lincoln with his story. Vance was paroled by Lincoln and worked on purchasing clothing for Confederate soldiers while they were imprisoned. He was pardoned March 14, 1865 on the condition he would not take up arms again for the Confederate States.

When Vance’s citizenship was restored after the war he was elected to congress as a Democrat in 1872 and served six terms. In 1884, President Cleveland appointed him assistant commissioner of patents. Vance also served in the state legislature from 1893 to 1896. He died on his farm November 28, 1899 and was buried at Riverside Cemetery in Asheville. Vance was a Master Mason, a member of the Methodist Church and married twice. He first married Harriett V. McElroy in 1851 and had six children, four of which survived to adulthood. He married for the second time in 1892 to Lizzie R Cook. 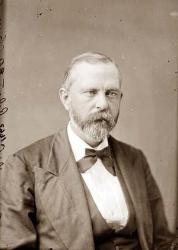