At the onset of the War Between the States, Johnston became a lieutenant in the local militia. Later, he was appointed Captain in Company K of the 23rd North Carolina in July, 1861.  In April, 1862, he was promoted to Lieutenant Colonel in the 23rd and fought as part of the Army of Northern Virginia and saw action during the Peninsula Campaign. He became commander of the regiment in the Battle of Seven Pines. During this engagement, he was wounded. Johnston returned to the 23rd in time to fight at the Battles of South Mountain and Sharpsburg.

In May of 1863, he commanded the 12th North Carolina Regiment at Chancellorsville after all of its field officers were wounded or killed. He again returned to the 23rd North Carolina to fight at Gettysburg, where he was wounded. In September of 1863, Johnston was promoted to Brigadier General and given command of Alfred Iverson’s Brigade. He commanded this brigade during the Overland Campaign of 1864 and was again wounded, this time at Spotsylvania. He returned to his brigade and participated in Jubal Early’s Shenandoah Campaign. He saw heavy action at the Battles of Winchester (3rd Battle), Fisher’s Hill, and Cedar Creek. He returned with the remnants of Early’s command to the trenches at Petersburg. During the Petersburg Campaign, Johnston served in temporary command of the division and was detached in March of 1865 to the Roanoke River line and tasked with catching deserters.  He served until paroled at Charlotte in May of 1865.

Upon the end of hostilities, Robert D. Johnston returned to North Carolina  and resumed the practice of law. He remained here for twenty years before moving to Alabama in 1887.  In Alabama, he became President of the Birmingham Bank. Johnston also served as a U. S. Land Office Register. He and his wife, Elizabeth Evans, had nine children. At the time of his death in 1919 in Winchester Virginia, he had been one of the last surviving Confederate Generals. He is buried in the Stonewall Jackson Cemetery there. 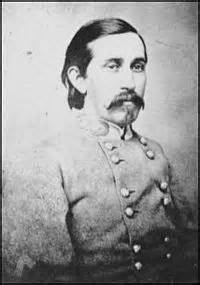