Robert Frederick Hoke was born in Lincolnton, North Carolina on May 27, 1837 to Michael and Frances Burton Hoke. Hoke’s father, Michael, was a prominent lawyer and politician who ran unsuccessfully as the Democrat candidate in the gubernatorial election of 1844. It is said that the stress of this political loss led to Michael’s death, and that as a result, the younger Hoke avoided politics for the rest of his life. Hoke attended school at the Lincolnton Academy and went on to attend the Kentucky Military Institute where he graduated in 1854. He returned to Lincolnton to look after his widowed mother and handle the family cotton mill and iron works.

At the outset of the War Between the States, Hoke joined Company K of the 1st North Carolina Infantry Regiment Volunteers (“The Bethel Regiment”) where he was commissioned 2nd Lieutenant. He was quickly promoted to Captain following the regiment’s first battle at Big Bethel in June, 1861. General D. H. Hill commended him for his performance, and he was again promoted to major in September of 1861.

Hoke was promoted to Brigadier General to rank from January 17, 1863 and was stationed in North Carolina as he recoverd from his previous wounding. His activities in the State culminated in the defeat and capture of the Union garrison at Plymouth, after which he was promoted to Major General on April 20, 1864. Hoke was only twenty-six years old at the time of his promotion and was the youngest major general to serve in the Confederate army during the War. Transferred back to Virginia, Hoke’s Division saw action at Drewry’s Bluff and Cold Harbor.

The division was sent back to North Carolian in December of 1864 to aid in the defense of Fort Fisher. After the fall of the fort, Hoke’s Division fell under General Johnston’s command and took part in the Battle of Bentonville in an unsuccessful attempt to halt General Sherman’s march through the Carolinas. Hoke surrendered with General Johnston at Bennett Place on April 26, 1865.

Following the War, Hoke married Lydia Van Wyck of New York in 1869. Her family was prominent in New York politics, and one of her brothers was the Mayor of New York City. Hoke pursued a number of business interests across North Carolina including insurance, mining, and a resort.  He also served as director of the North Carolina Railroad. After much success and post-war recognition, Hoke died in Raleigh on July 3, 1912. He is buried at Raleigh’s Oakwood Cemetery. Hoke County, North Carolina was named for the General in 1911. Hoke is often remembered as one of Lee’s finest generals. Hoke was  nephew of Brigadier General John Franklin Hoke. 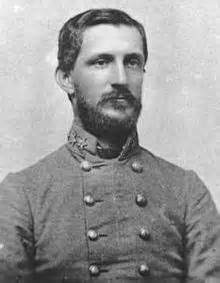