Theophilus Hunter Holmes, born on November 11, 1804, was the son of Governor Gabriel Holmes of Sampson County. He was educated in the local schools and entered West Point in 1825.

Upon graduation in 1829, Holmes served in the army, attaining the rank of Captain in December 1838. He married Laura Wetmore in 1841. The marriage eventually produced eight children (his eldest son, his namesake and a Confederate lieutenant, would later be killed at the Battle of Malvern Hill in 1862). He participated in the Seminole War and later the Mexican War. Holmes was brevetted Major at Monterrey for his courageous conduct under fire. He served in many peacetime army posts including tours in Arkansas, Texas, and Mississippi.

Shortly following the attack on Fort Sumter, Major Holmes resigned his command of Governor’s Island in New York Harbor and was commissioned Colonel in the Confederate States Army. After working to improve defenses around coastal North Carolina, Holmes was promoted to Brigadier General by President Davis and posted to command the Department of Fredericksburg.  During the Battle of First Mannassas, he commanded a brigade under General Beauregard but the Union Army was defeated before his troops were able to join the battle. He was promoted to Major General in October and thereafter assigned to the Department of North Carolina where he began organization of the North Carolina Troops that would be furnished to the Confederate Army.

He was then transferred back to North Carolina for a short time to help combat General Burnside’s activities on the coast. Holmes was offered promotion to Lieutenant General in the Fall of 1862 along with reassignment to the Trans-Mississippi theater. He declined the promotion but accepted command and worked to organize affairs in that department. Holmes was again offered promotion to Lieutenant General and he accepted.

By 1864, his health was declining and criticism of his performance was mounting. He was relieved of command in the west by General Kirby Smith and transferred to command of the District of Arkansas.  Eventually, he was transferred back to North Carolina  to  command the State’s reserve troops until the end of the War. He surrendered along with General Johnston to General Sherman on April 26, 1865. He was North Carolina’s senior officer during the War.

Holmes resided near Fayetteville after the War, running a small farm until his death in 1880. He is buried in the cemetery at McPherson Presbyterian Church in Fayetteville. 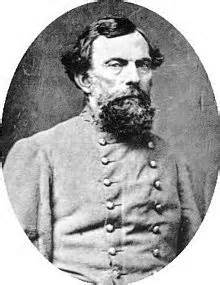