Thomas Pleasant Dockery was born on December 13, 1833 in Montgomery County, North Carolina. His father John Dockery was a Colonel who took part in the removal of Indians from North Carolina. The family moved to Tennessee and then settled in Columbia County, Arkansas. From here his father helped to establish the first railroad in Arkansas.

Dockery offered his services to the Confederacy at the start of the War. He was given a commission as a Colonel in command of the 5th Arkansas Troops. He then commanded the 19th Arkansas Infantry Regiment.  Dockery led the regiment at the Battle of Wilson’s Creek in Missouri, and then at the Battle of Shiloh in Tennessee. He then took command of the Central Arkansas Region for a short time. He led his brigade around Vicksburg until its fall where Dockery was captured and eventually paroled.

August 1863 found Dockery with a promotion to Brigadier General and in command of a new brigade he raised from Arkansas. Dockery led his troops until surrendering to Union forces in May 1865. His surrender concluded all fighting in Arkansas.

Following the War, Dockery went on to become a civil engineer in Houston, Texas. He then moved to New York City where he died on February 27, 1898. His body was taken to Natchez, Mississippi, where his daughters lived. Dockery was buried at the Natchez City Cemetery. 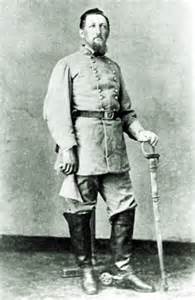