William Dorsey Pender was born February 6, 1834 on his family’s plantation at Pender’s Crossroads in Edgecombe County, NC.  His parents are James and Sally Routh Pender. Dorsey Pender, as he liked to be called, attended the United States Military Academy, graduated in 1854, was commissioned a second lieutenant, and assigned to the 1st Artillery. He then served in the 2nd Artillery until transferred to the 1st Dragoons. In this unit he distinguished himself fighting Indians in what would later become the state of Washington.

In March 1861, with the rising tensions in the South, Pender resigned his commission in the U. S. Army and offered his services to the Confederacy. He was commissioned a captain in the artillery. By May of 1861, he had been appointed Colonel of the 13th N. C. Regiment before leading the 6th N. C. Regiment. Dorsey Pender saw his first action in June of 1862 in the Seven Pines Battle. His success in this battle earned him a promotion, made personally on the battlefield by President Davis, to Brigadier General. He was then assigned to lead a brigade of Tar Heel regiments in Ambrose Powell Hill’s Division.

Pender was an aggressive brigade commander in the Seven Days Battle Campaign. He fought gallantly and was wounded in the arm during the Battle of Glendale. Pender did not remain on the sidelines for long, returning from his wounds in time to take part in the Battles of Cedar Mountain, Second Bull Run, Harper’s Ferry, and Sharpsburg.  In the Maryland Campaign, Hill’s Division, with Pender and his men, saved the Army of Northern Virginia with a forced seventeen mile march to reinforce the Army’s right flank and turn back Union troops.

In the Battle of Fredericksburg, Pender was wounded in the left arm and bled badly. However, he remained astride his horse and commanded his men. In May of 1863, the Army of Northern Virginia would find itself fighting at Chancellorsville. There, Pender assumed command of the Division when A. P. Hill was wounded. Then, on May 3, 1863, Pender again received a minor wound. However, the biggest wound was to the Army of Northern Virginia when Thomas “Stonewall” Jackson was accidentally wounded by Confederate troops. Following his death, Robert E. Lee reorganized his Army and promoted A. P. Hill to Corps Commander. The Division command that was

A. P. Hill’s fell to Dorsey Pender. At age 29, Pender became the youngest Major General in the Confederate Army.

In June of 1863, Robert E. Lee led the Army of Northern Virginia into Pennsylvania. On July 1, 1863, Pender’s Division moved in support of General Henry Heth’s Division down the Chambersburg Pike toward Gettysburg. Pender and his division saw action around 4:00 PM when Hill ordered him to attack Seminary Ridge. The assault by Pender’s Division forced the Union troops back into Gettysburg despite heavy Confederate losses.

Pender again saw action on July 2, 1863. He led his troops in an attack on Cemetery Hill. In this action he was wounded in his thigh by artillery shell fragments. He turned over command to James Lane. His troops faltered and were repulsed after the loss of their Division Commander.

In the subsequent retreat back to Virginia, Pender was taken to Staunton, Virginia to recover. There, on July 18, an artery in his leg ruptured. Surgeons amputated the injured leg but it proved futile as William Dorsey Pender bled out and died.  His remains were taken to Tarboro, NC and buried in the Calvary Parish Church Cemetery.  The perimeter of his grave is lined with cannonballs. 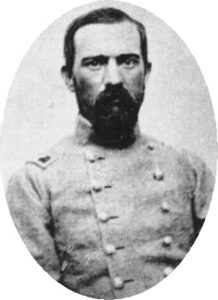