William Gaston Lewis was born in Rocky Mount, NC on September 3, 1835 to Dr. John Wesley Lewis and Catherine Ann Battle. He attended the Lovejoy Academy in Raleigh.  Dr. Lewis died and the family moved to Chapel Hill. Lewis entered the University of North Carolina to study civil engineering and graduated in 1855. He worked around the country as a teacher and surveyor. He was appointed to the United States Survey Corps in 1857.  Lewis returned to North Carolina to work as the assistant engineer for the Wilmington and Weldon Railroad.

The regiement was transferred back to North Carolina and took part in the skirmishes around Kinston and New Bern in late 1862. The regiment was then moved again to Virginia where it joined the Gettysburg Campaign. After the regiment’s colonel was wounded and captured, Lewis took command. Sent south to North Carolina again, Lewis led the regiment in actions around the coast and took part in General Hoke’s recapture of Plymouth.

In 1864, Lewis was placed at the head of Robert Hoke’s Brigade at the Battle of Cold Harbor where he was promoted to Brigadier General. As part of Jubal Early’s Division, he took part in the raid on Washington, DC where he was wounded.

He married Martha Lucinda “Mittie” Pender during this time after a courtship that began in 1861. Mittie was a first cousin of Major General Dorsey Pender.

As an engineer, he oversaw the building of Confederate entrenchments around Drewry’s Bluff which remained an essential part of the Confederate line of defense during the Petersburg Campaign. Captured at Farmville, VA on

Upon his return to North Carolina, Lewis continued his career as a civil engineer, including a thirteen-year term as North Carolina’s State Engineer. He also worked for various railroads until his death from pneumonia in 1901. Lewis is buried in Willow Dale Cemetery in Goldsboro, NC. 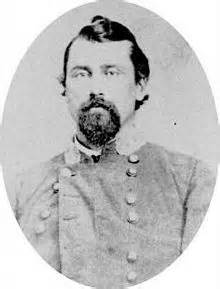