Major-General William Henry Chase Whiting was born in Biloxi, Mississippi on March 22, 1824 to Levi and Mary Whiting. His father was an officer in the United States army for forty years. Whiting followed in his father’s footsteps with a career in the military. He was a brilliant student, entering Boston English High School, the nation’s first public high school, at age 12 and graduating as the valedictorian two years later. He enrolled at Georgetown College graduating second in his class at age sixteen before entering the United States Military Academy in 1841. He graduated the academy July 1, 1845 at the head of his class with the highest grades ever attained by a cadet until that time.

After he graduated, Whiting was promoted to second lieutenant of engineers and saw service all over the country including the Gulf Coast, the Pacific Coast, and assignments back on the east coast including Florida, Georgia, and North Carolina. He resigned in February 1861 after sixteen years of Federal service having attained the rank of captain. He was appointed major of engineers for the state of Georgia and was given the same rank in the Confederate States army. His early assignments included inspecting the works at Charleston harbor, inspector general of North Carolina defenses, chief of staff to General Joe Johnston at Harper’s Ferry, and making the arrangements for reinforcing General P. G. T. Beauregard’s army at Manassas Junction.

Whiting’s initial success was acknowledged by President Davis and he was promoted three grades to brigadier general. He was assigned a brigade and saw service at Yorktown, Seven Pines, General T. J. Jackson’s Valley campaign, and Gaines Mill and Malvern Hill of the Seven Days battles around Richmond. Whiting never achieved the same success as a field commander as he did as an engineer. His pessimistic nature and inability to get along with other officers contributed to his disappointing record in the field.  Whiting suffered from chronic fatigue and requested a medical furlough after the battles around Richmond. Lee recognized Whiting’s limitations and replaced with him with General John B. Hood. Whiting was then assigned command of the District of the Cape Fear in North Carolina. Here Whiting was finally appointed major general and employed his engineering skills in developing Fort Fisher, the strongest fortress in the Confederacy. Whiting remained in that assignment until May 1864 when General Beauregard requested him in the defense of Petersburg. Once again, he was a failure in the field and there were even accusations that he was either drunk or under the influence of narcotics. He requested a transfer back to Wilmington and was back by September. Unfortunately, President Davis placed his friend General Braxton Bragg in command at Wilmington soon after Whiting’s return. When the federals attacked Fort Fisher in late December and then again in early January, Whiting returned to the Fort and fought gallantly as a volunteer. Wounded twice, he was captured and taken prisoner. Whiting was taken to Fort Columbus on Governors Island in New York Harbor. Whiting’s wounds were not fatal but weakened by war service and the leg injury; he developed dysentery and died unexpectedly on March 10, 1865. Originally buried at Greenwood cemetery in Brooklyn, his wife had him reinterred in Wilmington’s Oakwood cemetery. Whiting was married to Katherine Davis Walker. They did not have children. 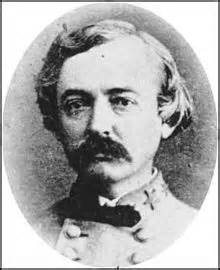