William Henry Forney was born November 9, 1823 in Lincolnton, North Carolina to parents Jacob and Sabrina Hoke Forney. His younger brother was John Henry Forney. His cousins also included, Stephen D. Ramseur, Robert F. Hoke, and Robert Daniel Johnston, all of which would hold commissions as Brigadier General in the Confederate Army. Forney’s family moved to Alabama when he was about 7 years old. He attended college at the University of Alabama in Tuscaloosa and graduated in 1844. He served in the Mexican War leading the Alabama Volunteers. In 1848, Forney was admitted to the Alabama Bar and begin to practice law in Jacksonville, Alabama. He served as trustee to the University of Alabama from 1851 until 1860. He also served in the Alabama House of Representatives from 1859 until 1860.

Upon the outbreak of the Civil War, Forney enlisted in the 10th Alabama regiment and was commissioned as a Captain serving under his brother Colonel John Forney. He saw action at Dranesville, Virginia in December of 1861. In this conflict he was wounded, the first of his thirteen total wounds. He rose to the rank of Lieutenant Colonel and fought in the Peninsula Campaign in 1862. Forney was wounded at Williamsburg, Virginia and subsequently captured while in a hospital. Upon his exchange in September of 1862, he was promoted to Colonel of the 10th Alabama. He led this unit at Fredericksburg and Chancellorsville where he was again wounded. Forney was also wounded on July 2, 1863 while leading a counter attack during the battle of Gettysburg. He was seriously wounded in the arm and foot. Left on the field, he was captured and imprisoned by the Union Army for over a year before being released.

Upon Forney’s release he returned to the Confederate Army and the 10th Alabama Regiment on crutches and lead the regiment until the fall of 1864. He was promoted to Brigadier General and assumed command of Cadmus Wilcox’s Brigade in February 1865. Even though he was weak and maimed, he remained with the Confederate Army until Robert E. Lee’s surrender at Appomattox.

After the war ended, Forney returned to the practice of law in Jacksonville, Alabama. He went on to serve in the Alabama State Senate in 1865 and 1866. He was elected to the United States House of Representative in 1875 and served there until 1893. President Grover Cleveland appointed Forney a Gettysburg Battlefield Commission member. He served on the commission until his death in 1894. He is buried in the City Cemetery in Jacksonville, Alabama. 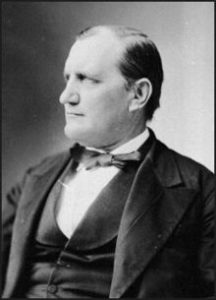