William Whedbee Kirkland was born at his family’s home “Ayr Mount” in Hillsborough, NC on February 13, 1833. To this day, the home is open to the public as a historic site and is a fine example of early 19th-century tri-partite architecture. Kirkland secured appointment to the United States Military Academy at West Point in 1852 but did not graduate. In 1855, he was commissioned in the Marine Corps as a 2nd Lieutenant. Kirkland married Susan A. Hardee, niece of General William J. Hardee, on February 16, 1859.

In August 1860, Kirkland resigned his commission and sought appointment from the Provisional Confederate Congress as an infantry officer. In the summer of 1861, he was elected Colonel of the 21st North Carolina Infantry Regiment and served at First Manassas and in the Shenandoah Valley Campaign of 1862. Kirkland was seriously wounded at the first battle of Winchester in May. During his recovery, he acted as Chief of Staff to General Cleburne and was at the Battle of Murfreesboro.

Kirkland, back in command of the regiment, participated in the Gettysburg Campaign and was shot in the thigh during the battle. He was promoted to Brigadier General in August, 1863 and took command of General Pettigrew’s former brigade composed of the 11th, 26th, 44th, 47th, and 52nd North Carolina Infantry Regiments. Kirkland was wounded at Bristoe Station in October 1863 and again at Gaines’s Mill on June 2, 1864 during the Battle of Cold Harbor.

After recuperating, Kirkland was assigned to command General John G. Martin’s former brigade in General Robert Hoke’s Division. The Division was sent to the outskirts of Wilmington in December, 1864 to aid, unsuccessfully, in the defense of Fort Fisher. The Division later joined with General Joseph Johnston’s Army and fought through the last campaign against General Sherman during his advance through North Carolina, including the Battle of Bentonville. Kirkland was in Greensboro when General Johnston surrendered the Army of Tennessee and was officially paroled on May 1, 1865.

Following the War, Kirkland lived in Savannah, GA as a businessman. During this time, his daughter, Bess, became a famous Broadway actress with the stage name of Odette Tyler. He eventually moved to New York City and worked in the United States Post Office there. As his health declined, he moved into a soldiers’ home in Washington, DC where he died on May 12, 1915. He is buried with his daughter’s in-laws at Elmwood Cemetery in Shepherdstown, WV. 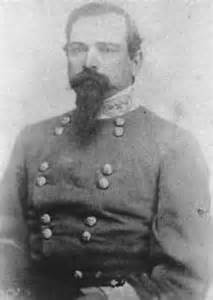