Zebulon Baird Vance was born in Weaverville, NC on May 13, 1830. He was the third of eight children born to his parents in the North Carolina Mountains. His father was a War of 1812 veteran and his grandfather served in the American Revolution. Vance saw his father die when he was 14 years old. This void in his life left him ambitious with no real avenues to follow. With the help of North Carolina Governor David Swain, Vance got a loan and attended the University of North Carolina. There, he studied law and exceeded all expectations in law and gained valuable oratory skills that benefited him for the rest of his life. Upon his graduation, he returned to western North Carolina to practice law. There, at the age of 24, the people elected him to the N. C. House of Commons.  Four short years later, the people of North Carolina elected him to a U. S. Congressional seat.

With the upcoming arguments over sectionalism looming, Congressman Vance was a staunch Union supporter. He championed for a strong but fair union government. Congressman Vance changed his beliefs with the firing upon Fort Sumter in 1861. Zebulon Vance threw his support behind the Confederacy.

Vance left Washington, DC and returned to Raleigh, NC where he raised a Confederate company of North Carolina troops to join the 14th N. C. Regiment. The men of the 26th N. C. Regiment elected him their Colonel in August of 1861.

As Colonel of the 26th Regiment, Vance led his troops in drill, discipline, and camp life. He saw action in the Battle of New Bern, where he led an orderly retreat of his regiment. The 26th N. C. saw further action at the Battle of Malvern Hill. Colonel Vance resigned his commission upon his election to Governor of North Carolina in September 1862. Command of the 26th N. C. fell to Colonel Henry K. Burgwyn.

Governor Vance became the 37th Governor of North Carolina on September 8, 1862. He assumed a state in near crisis. Several of the port merchants were supporting the Union. The eastern part of the state was pro-slavery while there was a division of loyalties in the mountain and Piedmont regions. Being a proponent of individual rights and local self-government caused Governor Vance and President Jefferson Davis to clash.  Vance led the state in being the only one not to suspend the writ of habeas corpus during the war.  In fact, this left the court system in the state to remain functioning.

The fighting that had gone on left the state of North Carolina in poor shape. With Wilmington being a main smuggling port for Blockade Runners, Vance saw to it that North Carolina received its supplies before any other state. This deeply upset Davis.  Vance helped the people to aid in mitigation of the conscription act and thus he was nicknamed “The War Governor of the South”. The people of North Carolina rallied behind Vance and re-elected him as Governor in 1864.

May 1865 found Governor Vance arrested by Federal troops in Statesville, NC and sent to Washington, DC to a prison. There, he learned of President Andrew Johnson’s Amnesty Program and filed for it in June, receiving a parole in July 1865.

Zebulon Vance returned to North Carolina, settling in Charlotte, where, he again practiced law. He received a pardon on March 11, 1867, despite never having had any charges filed against him for his actions in the Confederacy.

In 1870, the N. C. Legislature elected him to become a U. S. Senator. However, the radical republicans in power on the Federal level would not swear him in nor allow him to sit as Senator.  They cited his formerly owning of slaves, support of the Confederacy, and him being on probation as stated in the 14th Amendment of the Constitution as their reason. In 1876, the state again turned to Vance as their Governor. In this capacity, he campaigned and argued in favor of education

The legislature of North Carolina, in 1879 again elected Vance to serve in the U. S. Senate, this time, successfully sworn into office. He remained in the Senate until his death in 1894 while in Washington, DC.  Funeral services for Vance took place in Washington, DC, Raleigh, NC, and Asheville, NC, where burial took place at Riverside Cemetery. Zebulon Vance left behind a legacy as being one of the most revered politicians in the state’s history. He was a champion of the State and held a special place in his heart for his Western NC mountain region.  This region greatly benefited from his services and it began to come out of its isolation and thrive, in part due to his actions. 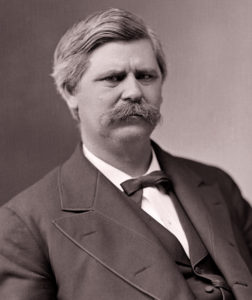