Collett Leventhorpe was born in England at Exmouth, Devonshire on May 15, 1815. He first served in Her Majesty’s 14th Regiment of Foot on mostly colonial duty and was also a licensed physician and published author. He came to the United States in 1842 and entered the Medical College of Charleston graduating at the top of his class.  In 1849, Leventhorpe married Louisa Bryan, the daughter of a prominent North Carolina family. The couple lived in Rutherfordton.

When war broke out and North Carolina seceded, Leventhorpe volunteered and was elected Colonel of the 34th North Carolina and eventually the 11th North Carolina (“The Bethel Regiment”) in 1862. His service was mainly in defense of North Carolina’s coastal region and he led the regiment at White Hall and the siege of Washington. In the summer of 1863 the Regiment, part of General Pettigrew’s Brigade, marched to Gettysburg with the Army of Northern Virginia. Leventhorpe was seriously wounded in the arm and hip during the fighting on July 1st and was captured by enemy cavalry as the Army retreated from Pennsylvania days later. He was imprisoned at Fort McHenry and Point Lookout until exchanged and paroled nine months later.

Upon his recovery, North Carolina Governor Zebulon Vance appointed Leventhorpe a Brigadier General of State Troops and he spent the remainder of the war addressing enemy threats to the rivers and railroads in northeastern North Carolina and organizing Home Guard actions to control deserters and sabotage in the piedmont. Although finally appointed a Confederate Brigadier General on February 18, 1865 by President Davis and confirmed by the Confederate Senate, Leventhorpe declined the promotion so as to remain in service to his state. Leventhorpe and his troops set up defenses around Raleigh upon Sherman’s approach and retreated to Greensboro where he surrendered on April 26, 1865.

After the war he travelled extensively between the south, New York City, and Europe. He eventually settled at Happy Valley in Wilkes County, NC. He died there on December 1, 1889 at “The Fountain,” a home belonging to his wife’s family. He is buried at Happy Valley’s Episcopal Cemetery near Lenoir, NC. 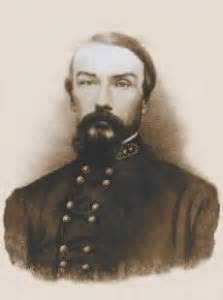