George Doherty Johnston was born in Hillsboro, North Carolina on May 30, 1832. His father relocated the family to Greensboro, Alabama in 1834. His father died less than a year later. Johnston’s widowed mother then moved the family to Marion, Alabama. Johnston received private tutoring and eventually attended Howard College and attended law school at Cumberland University. Upon being admitted to the bar, Johnston returned home to Marion to practice law. He was elected Mayor of Marion in 1856 and to the Alabama legislature in 1857.

Following Alabama’s secession from the Union, Johnston offered his services to the state. He fought in the First Battle of Bull Run as a Lieutenant in the 4th Alabama Infantry Regiment. In January 1862, he was promoted to Major of the 25th Alabama Infantry Regiment. He served as a Major until his promotion to Colonel of the 25th in September 1862. Two days before he was wounded at the Battle of Ezra Church, Johnston was promoted to Brigadier General. He fought in the Franklin-Nashville Campaign on crutches before eventually taking command of Quarles’ Brigade after the Battle of Franklin. He went on to fight with the Army of Tennessee in every major battle until the Army’s Surrender at Bennett Place in Durham, North Carolina.

After the conclusion of the War, Johnston returned to Alabama and served as the Commandant of Cadets at the University of Alabama. He eventually became Superintendent of the South Carolina Military Academy. Johnston also served as the United States Civil Service Commissioner, a position appointed by President Grover Cleveland. Upon his return to Tuscaloosa, Alabama he was elected a State Senator. Johnston died in December 1910 and was buried at Greenwood Cemetery in Tuscaloosa, Alabama. 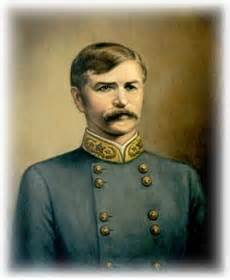