James Henry Lane was born at Matthews Court House, VA to Henry Gardner Lane and Mary Ann Henry Barkwell on July 28, 1833. He began his long career in education at the Virginia Military Institute where he graduated in 1854 the top of his class and went on to study science, earning a masters degree at the University of Virginia in 1857. He became an assistant professor of mathematics and tacticts at VMI and later at Florida State Seminary.

When the War Between the States began, Lane was teaching natural philosophy at the North Carolina Military Institute at Charlotte. He offered his services to the State and became a drillmaster and adjutant at the training camp established at Raleigh. Lane was elected Major of the First North Carolina Volunteers (“The Bethel Regiment”) under Colonel D. H. Hill.

At the Battle of Big Bethel, Colonel Hill credited Major Lane with responsibility for the commencement of hostilities after a detachment under his command chased a party of Union soldiers over the New Market bridge. After the battle, Lane was promoted to Lieutenant Colonel. He went on to be elected the Colonel of the 28th North Carolina Regiment and upon reorganization in the wake of the conscription acts, was commended by General Holmes for organizing the first regiment to re-enlist for the duration.

Lane fought bravely at Hanover Court House, Cold Harbor, Frayser’s Farm, and Sharpsburg. He was promoted to Brigadier General on November 1, 1862 and dubbed the “Little General” by his men. He was twenty-seven years old. Lane’s brigade fought under Stonewall Jackson at Chancellorsville and played a major part at Gettysburg, fighting on July 1st as well as on July 3rd. On that day, his horse was shot out from under him as he led his men up Cemetery Hill as part of Trimble’s Division.

Continuing the hard fighting in which he seemed to endlessly find himself, his brigade held the line at great cost at Spotsylvania Court House and also fought at Cold Harbor. Here, Lane was severely wounded in the groin and he remained out of action until he surrendered his brigade under General Lee on April 9, 1865 at Appomattox.

After the War, Lane went back to teaching and among other positions, joined the faculties of the Virginia Agricultural and Mechanical College (now Virginia Tech), Missouri State University, and the Alabama Agricultural and Mechanical College (now Auburn University). He died on September 21, 1907 in Auburn, Alabama and is buried there in the Pine Hill Cemetery. Lane Hall at Virginia Tech is named in memory of General Lane. 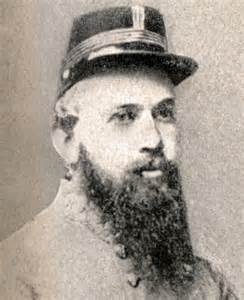