Born on February 18, 1817 in the home of his great-great grandfather in New Bern, NC was Lewis Addison Armistead. His father, Walker Armistead and his mother Elizabeth Stanly, descended from the English people and had been on the North American Continent since colonial times. Walker Armistead was a veteran of the War of 1812. Armistead’s uncle, Major George Armistead, was in command at Fort McHenry during the attack that yielded the Star Spangled Banner.  Lewis followed in these footsteps, and attended the U. S. Military Academy in West Point, NY. Lo, as he was called by his friends, did not graduate. He resigned his position at West Point after an incident in which he smashed a plate over Jubal Early’s head. It is also noted that Lewis Armistead was not doing very well academically and this may have been another reason for his resignation.

With his father’s influence and status, Armistead was given a commission as a Second Lieutenant in the 6th U. S. Infantry.  He was   promoted to First Lieutenant in 1844. Also in 1844, Armistead married Cecillia Lee Love. They had two children. Lo then served in Arkansas. After serving in the Oklahoma Territory at Fort Washita, Armistead joined the Mexican American War. There he fought in numerous engagements and eventually was brevetted a major for his actions in the Battle of Chapultepec where he was wounded. After the conflict ended, Armistead was sent to Kentucky to recruiting duty. There in April of 1850, while stationed at Jefferson Barracks, his daughter died of illness. His family was then transferred to Fort Dodge where in December 1850 his wife Cecillia died as well. 1852 brought more bad news for Lewis Armistead and his son, as their family home in Virginia burned to the ground destroying everything. Lo and his son went back to Virginia to help the family rebuild. During this time period, he met and married his second wife, Cornelia T. Jamison. They both travelled west when Armistead returned to duty in the middle of 1853.  Lewis and his new wife travelled in the west from various posts. They had a son named Lewis B. Armistead who died in December, 1854 and is buried next to his sister at Jefferson Barracks.  His second wife died from cholera in 1855. Armistead, now promoted to captain, served in the Nebraska and Kansas Territories from 1855-1858. He took part in the Mohave Expedition in 1858-1859.

Armistead was in command of a small detachment in San Diego at the outbreak of the Civil War. There, he served with Winfield Hancock who was a quartermaster in Los Angeles. Armistead and Hancock became good friends before the war and ultimately fought each other on the field of battle. He travelled east and offered his services to the State of Virginia where he received a commission as a major before being given command of the 57th Virginia Regiment as its Colonel. April 1, 1862, he was promoted brigadier-general, and in this rank he was assigned to the command of a brigade in the division of Benjamin Huger. He led the brigade in the Seven Pines Battle.  When Robert E. Lee took command of the Army of Northern Virginia, Armistead remained a brigade commander and fought in the Seven Days Campaign before leading the charge up Malvern Hill. He was with the Army at Second Bull Run and Sharpsburg.  Armistead was appointed as the Provost Marshal during the Maryland Campaign and tasked with catching deserters. General Armistead was then sent to command a brigade in Pickett’s Division of Longstreet’s Corps.  They did not participate in the Chancellorsville Battle due to being in southeastern Virginia around Suffolk.

Armistead travelled north with Pickett’s Division and the Army of Northern Virginia arriving in Gettysburg on the evening of the 2nd of July, 1863. In the third day of battle, Armistead and Pickett’s Division made a direct frontal assault on the center of the Union lines. In this charge, Lewis Armistead led his brigade to the Union lines. There, with his hat upon his sabre, he was shot and mortally wounded. His brigade fell back soon after his wounding and the High Tide of the Confederacy passed. Armistead was attended to by Captain Henry Bingham, a fellow Mason and was taken to the Spangler Farm house. Lewis Armistead’s wounds were believed to be non-mortal. However, he succumbed to infection related to the injuries he received while leading his brigade against the lines occupied by his friend, General Winfield Scott Hancock. He is buried in Baltimore, MD at the Old Saint Paul’s Cemetery.  The Friend to Friend Masonic Memorial at Gettysburg, PA depicts a wounded Lewis Armistead and Captain Henry Bingham in the moments after Armistead was wounded. 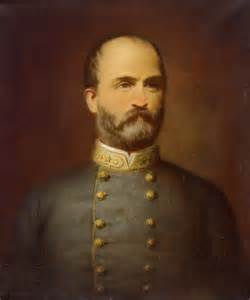