Dodson Ramseur, as he liked to be called, was born on May 31, 1837 in Lincolnton, NC. His parents were Jacob Able and Mary Ramseur. Dodson Ramseur attended Davidson College. In this setting, he learned mathematics under future General Daniel Harvey Hill. He attended the U. S. Military Academy at West Point, NY. Graduating in 1860, he was commissioned a second lieutenant and assigned to the 3rd U. S. Artillery. He quickly resigned his commission and went to Alabama to offer his services. Upon the secession of North Carolina, he transferred to the 10th N. C. Militia. He was then promoted to Lieutenant Colonel of the 3rd N. C. Infantry Regiment. He was injured when he was tossed off of his horse. He returned to active duty in the spring.

In 1862, at the start of the Peninsula Campaign, Ramseur commanded a unit of artillery. He was soon elected to Colonel of the 49th N. C. Infantry. He saw his first action at the Battle of Malvern Hill. Being severely wounded leading a futile charge against the Union positions, he returned to North Carolina to recuperate from a mangled arm. Upon his return in 1862, he commanded a brigade of four North Carolina regiments in Rhodes’ Division of Jackson’s Corps. He was promoted to brigadier general in November of 1862. At the time of his promotion he was 25 years old and was the youngest general officer in the Confederate Army.

Ramseur’s Brigade was the lead brigade in the flank attack at Chancellorsville. After Jackson was mortally wounded, General J. E. B. Stuart recommended Ramseur for major general. However, this idea was not accepted at the time.

On July 1, 1863, Ramseur was in Rhodes’ Division and participated in the successful attacks on the Union 1st Corps. He was sent in from the reserves to attack the I Corps. The Union lines broke and Dodson’s men pursued them to the base of Cemetery Hill where they were ordered to stop the pursuit. They did not fight again in the Battle of Gettysburg. They retreated to Virginia with the Army of Northern Virginia.

In the Wilderness Campaign, Ramseur’s Brigade was assigned to Ewell’s Second Corps. He began the campaign in reserve and was then sent forward to repel an attack by Burnside’s Corps as they tried to flank Ewell’s Corps. Ramseur and his men performed a wonderful counter attack and threw back the Union troops. He also attacked the II Corps at Spotsylvania Court House at the Mule Shoe or Bloody Angle. During this attack he was wounded again but did not leave his troops.

In June 1864, Ramseur replaced Jubal Early at the head of his Division in Early’s Corps (formerly Ewell’s Corps). He went on with his Division and blocked Grant from capturing Petersburg.

In late June of 1864, Early’s Corps went to the Shenandoah Valley to try and draw Union forces out of Petersburg to relieve Richmond. In this campaign Early’s Corps, with Ramseur’s men, made a move toward the outskirts of Washington, DC before turning around. Grant sent General Sheridan to drive Early out of the Valley. In the Battle of Third Winchester, Sheridan drove Ramseur’s Division back. Rhodes was mortally wounded.

In a surprise attack a month later, Early routed Sheridan’s troops. Early’s men were exhausted and hungry and began to eat the food left by the Union soldiers. Ramseur managed to lead a group of one to two hundred men against the counter attack of Sheridan. He went on to be wounded by Union fire. Having been shot in the lungs and left for dead, he was captured by Union troops and taken to Sheridan’s headquarters. He found out the day before the battle that his wife had given birth to his baby daughter. He died on the following day, October 20, 1864, at Sheridan’s headquarters.  His body was returned to Lincolnton and buried in the cemetery at St. Luke’s Episcopal Church. 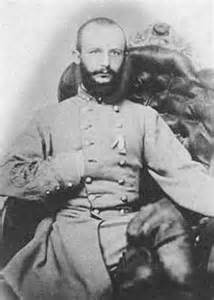